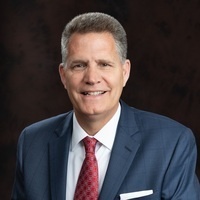 Judge Bill Gravell (UMHB Class of 1986) was sworn into office on January 1, 2019 as County Judge for Williamson County.  Prior to being elected as County Judge, Judge Gravell served as Justice of the Peace, Pct. # 3 from March 1, 2013 thru December 31, 2018.  During his tenure as Justice of the Peace, Judge Gravell’s office was the recipient of the "2013 Collections Program of the Year" state award from the Governmental Collection Association of Texas. In addition, in 2015, his court received the “Tyler Public Sector Excellence Award" for courts in America awarded by Tyler Technologies. At the 2015 Court Technology Conference in Minneapolis, Minnesota, Judge Gravell received the national “2015 CITOC Innovation in Business Process” award for contributions to the judiciary in technology and court business processes presented by the Court Information Technology Officers Consortium. Also in 2015, Judge Gravell was selected as “Judge of the Year” in Central Texas.  On September 3, 2015 Judge Gravell was appointed as a member of the Texas Judicial Council by Chief Justice Hecht for a term of four years and has since been reappointed to serve in his capacity of County Judge. In 2016, Judge Gravell was selected one of twenty-four county elected officials to attend the Texas Association of Counties leadership school in Texas. Also in 2016, Judge Gravell served and continues to serve on the teaching faculty for Judges in Texas. He served as the Chairman of the JPCA Legislative Committee for the State of Texas. In 2017, Judge Gravell was one of fifteen Judges chosen in America to attend the National Judicial College for specialty training in the area of Judicial Coaching and Mentoring.  Judge Gravell and his wife, Jill, enjoy spending their spare time with their two children and five grandchildren.