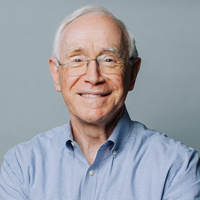 Chaplain (Brigadier General) Bob Page, U.S. Air Force (Retired) married Ruth in 1972 while he was a senior at LSU.  After graduation they left for USAF Navigator School in California.  He served as a navigator on a KC-135 doing inflight air refueling six years until they left the Air Force for Southwestern Seminary in Fort Worth, Texas in 1980.  After seminary he served as the pastor of churches in Arkansas and North Carolina for six years.  In 1989 Bob returned to active duty Air Force where he served as a chaplain starting out with an assignment to Yokota Air Base, Japan where they served 4 years.  He went on to serve assignments in Texas, New Jersey, Virginia and Washington, DC.  Bob retired from the Air Force after 33 years as the Deputy Chief of Chaplains.  Bob and Ruth have two daughters, Anne and Allison, and five grandchildren ages 23 years to 4 years.  They now live on the southwest side of Houston near both daughters and their families.  Dr. Page currently serves at River Pointe Church as the Missions and Care Pastor.  Their daughter and son-in-law are both on staff at the same church.  Ruth also volunteers at River Pointe Church and enjoys having her grandchildren nearby.