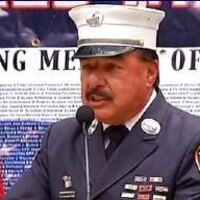 Joe Torrillo was a 25 year Lieutenant with the NYC Fire Dept. who is now retired on disability. He spent the first 15 years of his career in Engine Company # 10, across the street from the South Tower of the World Trade Center.
On the way to the press conference that was set for 9 a. m., Joe was about an eighth of a mile away from the World Trade Center, when American Airlines Flight #11 struck the South Tower at 8:46 a.m. Fearing for his Firefighter brothers in Engine Co. 10 and Ladder Co. 10 across the street from the Towers, Joe diverted to the scene to render assistance. Three minutes after donning borrowed bunker gear, at 9:03 a.m., the second jet, flew over Joe's head and slammed in to the South Tower. With a background in Structural Engineering, Joe made an immediate assessment that everyone above the fire was doomed to death, and the buildings would collapse. While Joe was involved in the rescue operation, the South tower fell at 9:59 a.m. Joe was buried alive with a fractured skull, broken ribs, broken arm, crushed spine and heavy internal bleeding. Shortly after
being found alive in the rubble, they removed Joe on a long spine board and placed him on the deck of a boat on the Hudson River, with the expectation of getting him to a hospital. As emergency personnel were holding his split scalp together, the North Tower fell and buried Joe alive again. About 45 minutes later, Joe was once again rescued from the debris, and taken across the Hudson River, where he awoke in a hospital room at the Jersey City Trauma Center in New Jersey. Because he was wearing a borrowed set of firefighting clothing with the name Thomas McNamara, Joe was misidentified by that name, and Joe was declared missing for 3 days. By
the time the sun set on the evening of September 11, 2001, Joe had miraculously survived the collapse of both Towers, but with life-long injuries. Sadly, "Billy Blazes" would come to represent the 343 New York City Firefighters who had made the supreme sacrifice of their lives in the rescue effort.
Today Joe Torrillo travels the world as a professional speaker with a quest to make our country the "Re-United States of America", resurrecting patriotism, trumpeting the men and women of the Armed Services, mentoring adolescents, and inspiring audiences of all sizes to embrace change and never give up on their dreams. Joe has a wide variety of topics to choose from which are all both inspiring and high in content. His memorable programs are an excellent fit for ANY type of organization. Joe’s speaking engagements very often end with a standing ovation, followed by a long line of attendees excited to meet him and shake his hand.

What a great speaker. A true American hero who continued to persevere despite what life threw at him.