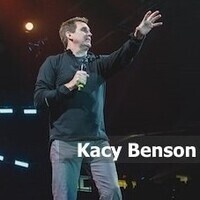 Speaking at conferences, public schools, churches, & summer camps, Kacy Benson shares his own real-life stories...often hilarious—sometimes heart-wrenching—to lead people into a closer relationship with Christ.  Kacy’s devotion to Christ, his heart for people, and his comedic perspective on life are contagious.  His passion is to see people surrender their hearts and lives to Christ.
​
In 2016, Kacy released his first book, "The Crash," (Mpact Publishing) which recounts the harrowing true-life-story of his surviving a plane crash in the piney woods of East Texas.  With each chapter of the story including biblical parallels for the events of that fateful day, the book garnered rave reviews.

In addition to his speaking ministry, Kacy is also the pastor of Freedom Fellowship, a new church-plant in Austin, Texas where he resides with his wife, Vickie, and sons, Coleton and Tyton.