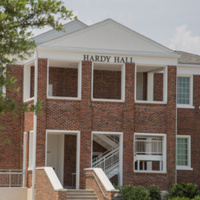 Hardy Hall was built in 1929 and named in honor of former president J. C. Hardy. It was built following the loss of Luther for the sum of $100,000. The first floor houses faculty offices and classrooms for Psychology, Sociology, Social Work, History and Political Science departments. The second story contains the dining hall, which is managed by Sodexho. In 2002, an elevator was added and the dining hall was renovated.

Great overview of the program that really made me excited for the future. Amy was an excellent speaker and able to answer all of my questions.